It seems every brand is coming out with their own version of BB cream at the moment, and this time it's Make Up Academy's (MUA) turn. Their version is called Beauty Balm instead of Blemish Balm, but since they put a big BB on it, we'll just assume that's supposed to be the same thing. 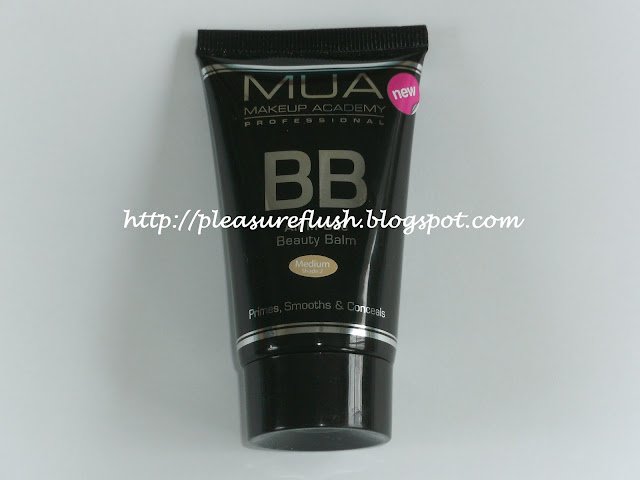 Although technically this is not a BB cream, because it doesn't include any SPF. They claim the all in one, multi-functional formula primes, protects and conceals. I'm not sure how it's supposed to protect your skin without any SPF though. Okay, so what does it do? It's basically a medium coverage foundation as far as I can see. For the price it's not a bad one either. The formula is a little on the thick side for my liking, but it does blend out eventually, and it gives a good medium coverage, so I don't need extra concealer on my spots/scars. I chose the medium shade as the light one was too light for me (it comes in 3 shades by the way), and other than being a little pink for my colouring, it's a very good match. It has a slight scent, but it doesn't bother me and fades away quickly anyway. I always set my foundation, so didn't test it without setting powder, but with it this lasted on me for a good few hours before I had to do some blotting, which is very much the same as any other foundation I own.

I'd say for £4 (or rather £3 at the moment in Superdrug!) this is a good foundation. It's a good size at 30 ml too. I would prefer it to have some SPF, but for the price it's really hard to fault it. Out of the four BB creams I have tried so far (MUA, 17, Garnier and Ginvera) this is not my favourite, but probably comes close to the 17 one. The Ginvera BB cream is still leading, although it contains the least product and costs the most, so I'd probably go for the 17 one when it came to repurchasing. I hated the Garnier one so much, I got rid of it, but I will be keeping and using this one, however, probably won't repurchase it if I ever run out.


Now for the swatches (all pictures were taken with flash):