As far as I'm aware the two new product launches this year that everyone got very excited about were Maybelline Color Tattoo eyeshadows and Revlon Lip Butters. I haven't actually purchased any of the Color Tattoo eyeshadows as the colours don't really excite me, I have most fo them from other brands already, but I have well and trully got sucked into the Revlon Lip Butter craze! I ended up buying 7 of them. 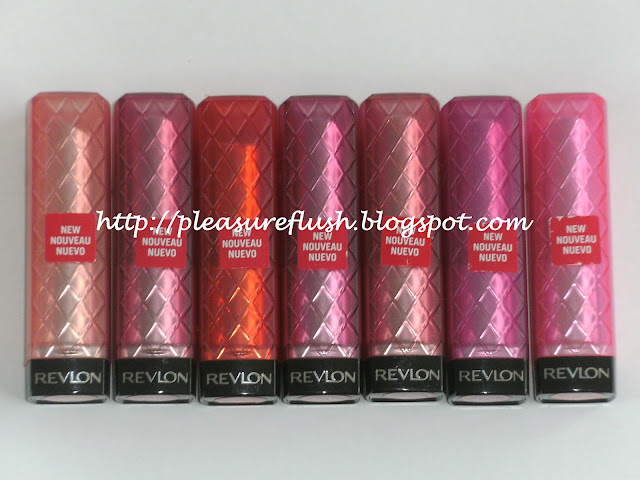 So do these live up to the hype? While they are not that exceptional, they are pretty good lightweight, moisturising lipsticks for the price. I don't normally buy drugstore/low end lipsticks anymore mainly due to the smell they all seem to have, I do make an exception for Revlon because in my mind they make the best cheap/drugstore/low end/whatever-you-call it lip products. I love the pigmentation and the fact that they don't stink. These lip butters are pretty much scent free and taste free, and some of them are very pigmented. In fact if you just want lip butters rather than lipsticks, I'd say they are almost too pigmented.

They are nicely moisturising, and they actually last for a good amount of time, about 2-3 hours. They come in a very good selection of colours. I went for the most pigmented ones because I wanted colours. I swiped them 3 times for the swatches, so you can see how the colours turn out, but some of them (Lollipop, Raspberry Pie, Candy Apple) actually deliver a lot of colour in just one swatch. A couple of the colours I won have some shimmer in them, Peach Parfait and Macaroon both have small gold flecks, although it's really only noticable in Peach Parfait. I don't mind either way, I like my shimmery lips too.

I took these with me on holiday to test them out properly and I was very happy with how they lasted on me even in the swimming pool, and they were moisturising enough without the need for extra lip balm. All in all, I would recommend you check them out, especially as Boots has a 3 for 2 offer on them at the moment. They cost £7.99 each, so you save a good amount if you buy 3. I believe these are permanent and they come in 14 shades (which is probably less than what the US got, but at least it's something).