I bought these Laura Geller products from eBay a little while ago, but never got around to doing a post about them with all the excitement about Mac Semi-Precious collection. These are actually from more than one collection although to be honest with you I'm not entirely sure exactly which ones as I tend to pick up bits and pieces from eBay as and when I see them and I've not seen these products pop up on QVC UK yet. Anyway, the products I got are Baked Cheek Dreams Highlighter and Blush in Vanilla Peach Cobbler, Eye Elements Baked Eyeshadow and Highlighter in Amethyst Skies and Baked Marble Eyeshadow/Eye Rimz in Toasty Pink/Berry Flambe. Bit of a mouthful, eh? 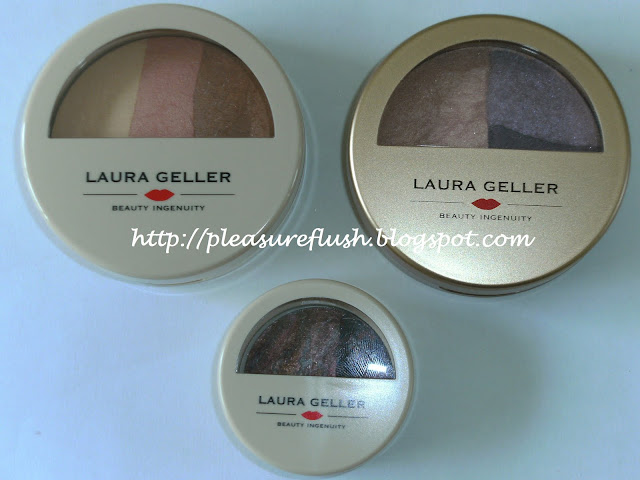 So let's look at the products I got in detail. First up is the Baked Cheek Dreams Highlighter and Blush in Vanilla Peach Cobbler. This is very similar in style to the Neapolitan blush I've already reviewed and swatched here as it also has a highlighter, a blush and a contour shade. Neapolitan is a bit cooler than this, but really the only difference is in the blush shade as the highlighter and the contour are pretty similar in both (maybe a tad cooler in Neapolitan, but not much). I like it that the blush strip is slightly wider in this, because although the compact is a pretty good size (9 g), the middle strip in my Neapolitan is quite thin and it's not easy to just pick up the blush unless you use a very small brush. The powder is soft and finely milled, as all my other Laura Geller blushes.

Read  about the other two products and see more pictures and swatches after the jump!

Moving onto the eyeshadow duo, I got Baked Marble Eyeshadow/Eye Rimz in Toasty Pink/Berry Flambe. It contains 2 eyeshadows, divided in a 2/3 - 1/3 proportion. Toasty Pink is a slightly shimmery and frosty melange of pink, light blue, gold, mauve which swirled together turns into a sort of pinky taupe colour. Berry Flambe is very shimmery, much darker mix of red, dark mauve, dark grey which turns into a purple mauve shade. It's quite intense swatched dry (as below), but if you foil it, that's when you see its true beauty. It looks great as an eyeliner with all the sparkles, really pretty. There is a certain amount of fallout with these baked eyeshadows, but I normally only experience this during application and not while wearing the eyeshadows. Of course you need a good base to apply these on top anyway. You get 1.8 g in the pan which is slightly less than a Mac mineralize eyeshadow.

Last, but not least is my favourite of the three, Eye Elements Baked Eyeshadow and Highlighter in Amethyst Skies. This is a bit of a strange product, don't think I've ever come across an eyeshadow trio and face highlighter in one compact before, but it is so pretty, that I simply don't care. It works, because the compact is large (9 g), so you can easily apply the highlighter without touching the eyeshadows with your brush. And the highlighter is really stunning. And so is the eyeshadow trio. So really, what's not to like? The eyeshadows are: light violet, dark mauve and dark bluey purple are great for creating a smoky look, and the highlighter can be used as an eyeshadow as well as a cheek highlighter. The eyeshadows are finely milled, easy to apply and blend, don't crease or fade. The highlighter is slightly frosty, but it's not glittery and it is such a beautiful shade. I've tried to find a dupe for it from my stash of Laura geller blushes/highlighters and Mac Mineralize Skinfinishes, but I don't have anything quite like it. It is peachier than Laura Geller Amaretti and Pleasureflush MSF, peachier and frostier than Laura Geller Ethereal Rose, much darker than Laura Geller Como. Mac Porcelain Pink MSF is pinker and less shimmery, and Mac By Candlelight is similar, but slightly pinker than Amethyst Skies (I'd say By Candlelight is probably the closest though). You can see the comparison swatches at the end of the post. Now onto the pictures...