Make Up Forever has some new amazing liquid eyeliners called Aqua Liners and I have 4 of them to show you now. I've ordered them from Guru Makeup Emporium and they cost £16.50 each. They come in 15 shades literally in every colour of the rainbow. I got Diamond Lagoon Green, Iridescent Electric Purple, Iridescent Fuchsia and Diamond Multicolour Black. I was especially wowed by Iridescent Fuchsia and Diamond Multicolour Black as they are both very unique shades. I mean how often do you get a bright pink eyeliner?


As their name suggests, these liners are waterproof, and they trully are smudgeproof and waterproof, once they dry (pretty quickly as well), they do not budge. However, they are easy to remove with a waterproof make up remover like Lancome Bi-Facil. The applicator and in fact the whole tube is very similar to Mac's Superslick Liquid Eyeliners that came out with Fabulous Felines which is by no means a critism as I love those eyeliners and own a good few myself. The applicator is very easy to use and it packs on lots of colour, but just the right amount of product! The multicolour black seems a bit light, dark grey rather than blck, but I can forgive its sheerness when I look at all the pretty multicolour sparkles it contains.

To be honest, there isn't really a big difference in the formula, but I have to say the MUFE colours are just so pretty and vibrant, and definitely more unique. These MUFE Aqua Liners are slightly more expensive at £16.50 compared to Mac's £15.00, and you also only get 1.7 ml instead of Mac's 1.8 ml, but in all fairness, I don't think that's going to make a huge difference, after all, I have never run out of liquid eyeliner myself.

See more pictures and swatches after the jump! 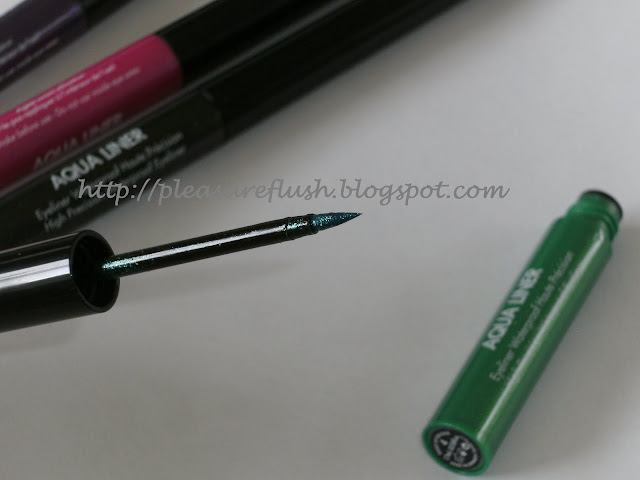