NOTD: GOSH Holographic Hero Nail Polish - For One Night Only?

If you follow me on Twitter, you will have seen my tweets about Gosh's coveted Holographic Hero nail polish that has been re-released recently. It has been branded as a "one night only" polish due to problems with it chipping quickly, so I thought I'd give it a go myself and see how much of that is true.


I was actually very pleasantly surprised by how well it lasted. The picture above was taken about 36 hours after I painted my nails. You can see a small crach on my middle finger nail, that's due to that bit of nail peeling badly (and subsequently breaking off sadly), but other than that there are were only a couple of small chips on my index finger nails after 2 days or so. I kept it on another day and by the end of day 3 it did look pretty bad, but no worse than any other nail polish (with a very few exceptions) would look on me. It certainly wasn't a one nighter for me.

The formula is very nice, thin enough to apply evenly and dry quickly. With holographic nail polish I always apply base coat, 2 coats of holo polish, then a top coat and another coat of holo polish on top which helps make it longer lasting and also this way the top coat doesn't dull the holographic effect. The holo effect on this is gorgeous, it's proper linear holo, although the Glitter Gal holographic polishes have a stronger linear effect. I think this one is up with the Layla holographic polishes I've tried, but is cheaper than both the Glitter Gal and Layla polishes. There wasn't any sunshine on the day I took most of the pictures, so I included some taken under strong indoor light and with flash too.

The GOSH Holographic Hero nial polish is available for £4.99 (for 8 ml) if you can find it. Although it's now permanent, it has taken me a couple of weeks to find it as most Superdrugs were out of stock. Hopefully once the hype dies down, it will be more readily available. If you like holographic polishes, this one is definitely a nice to have.

If you have it, let me know in the comments how you like it. 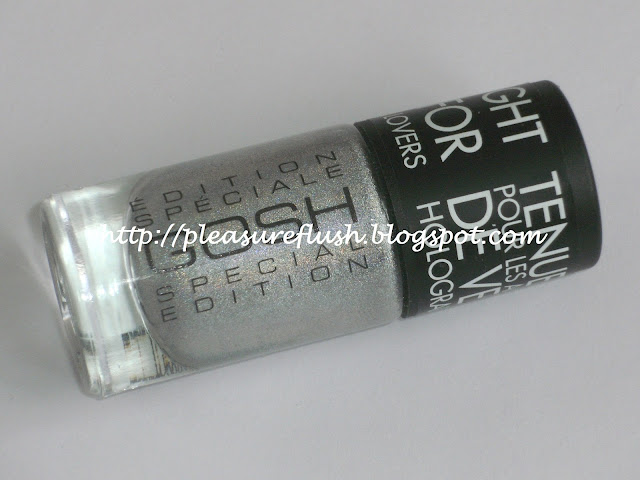