My Mac In Extra Dimension Haul and Swatches - Eyeshadows

Here's part 3 of my epic Mac In Extra Dimension haul, the eyeshadows. I only bought 4 out of 6 as the silver one really didn't interest me and I'm pretty sure I have a very similar one to the mauve one. These four, or in particular 3, are quite a different story. 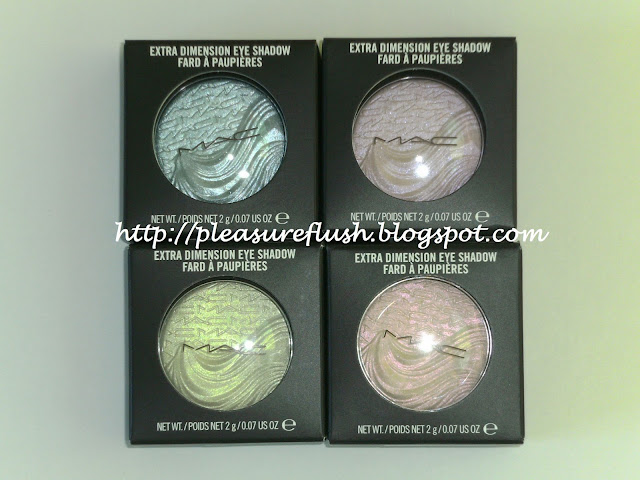 Dimensional Blue is nice, but it doesn't have the same duochrome effect as the other three. Triple Impact has gorgeous purple sheen to it, Zestful has green and Opalesse has pink duochrome. They look stunning swatched on my arm. Admittedly they are quite sheer and don't show up half as well on the eyes, but they still give a soft, ethereal effect and I'm thinking they might really pop over a black base (haven't tried them yet though). They have a creamy, soft texture like that I would expect from these, so I'm happy with them.

You get a measly 2 g for £16.50. Although they are limited edition, they are all still available, so for once I could actually review/post about something from Mac that didn't sell out in 2 seconds.